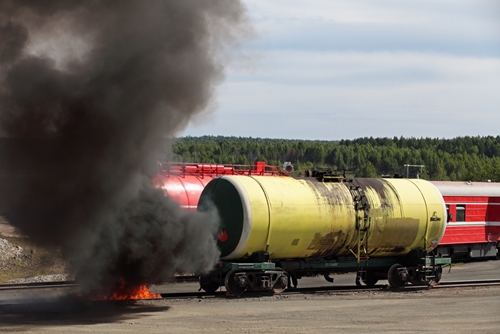 In Lac-Mégantic, Quebec, on July 6, 2013, a train carrying petroleum crude oil derailed, causing an explosion that resulted in the destruction of half of the town and the deaths of 47 people. However, one year after the disaster, the Canadian Transportation Safety Board released 3D modeling of what the tanker cars that were destroyed in the accident had looked like, according to Canada.com. The virtual representations of the tankers were created through scanning the damaged cars and is giving investigators insight into the tankers' structural weakness, which will provide the basis for the TSB's investigation.

Inside the disaster
According to The Canadian Press, the train derailed in the center of Lac-Mégantic at 1:15 a.m. The TSB report noted 63 tankers carrying petroleum crude oil and two box cars derailed, which resulted in 6 million liters of spilled oil.

The Globe and Mail reported the type of crude oil being hauled was a particularly volatile type that was highly flammable. The fires and explosions that happened when the train was derailed and oil was spilled ruined the railway tracks as well as 50 vehicles and 40 buildings.

The Globe and Mail reported three former workers at the railway company, Montreal, Maine & Atlantic Railway, responsible for the crash have already been charged with criminal negligence, in addition to the company itself.

How 3D modeling is crucial
The types of tankers that hauled the chemicals may not have been the correct equipment to do so. According to The Globe and Mail, Ed Burkhardt, chairman of MM&A, has said that the company wouldn't have hauled crude oil had it been aware of the risks associated with the chemicals.

"The railway guys felt this [crude] was very viscous," Burkhardt said about why MM&A used the specific cars it did for the type of crude oil that was being carried. "As a matter of fact, we were always told that if you had a container of crude oil and threw a match in it, the match would go out."

However, in the wake of the Lac-Mégantic tragedy, 3D scanning and modeling is helping to uncover that the types of tankers used might be to blame for the accident that killed many Canadians. According to the TSB report, investigators scanned an exemplar tank in addition to the tankers to have data on an undamaged car available. This is important to the analysis of the incident, as the scans of the undamaged car compared to those of the tankers involved in the accident show that the oil was confined in a smaller space, which caused pressure to build up within the tankers.

Canada.com reported the models may be able to help engineers of these tankers design and build better cars in the future. Since the models showcase weaknesses in structure, such as where the tankers' were stressed and why, can give engineers the information about structural patterns they need to prevent such disasters from happening again.