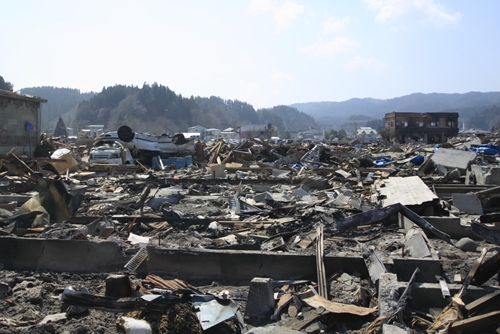 Scientists in China and the U.S. recently teamed up to scan China's active Haiyuan fault, and were able to gather highly accurate topographic data of the zone using aerial light detection and ranging (LiDAR) technology. Because it is one of the most active fault zones in China, understanding the Haiyuan fault is important for researchers to pinpoint future fault activity and possibly prevent the negative effects of large-scale earthquakes.

The report "Quantitative study of tectonic geomorphology along the Haiyuan fault based on airborne LiDAR" was published in the latest Chinese Science Bulletin. It was conducted by researchers at the State Key Laboratory of Earthquake Dynamics and the National Infrastructure Service in Beijing with help from a scientists at the the United States Geological Survey (USGS). They used aerial LiDAR to scan the fault zone, and 3D modeling was key to highlight past fissures in the fault region, which in turn will help researchers determine future tremors.

The tremor in 1920 is particularly notable as it caused a 237-kilometer-long rupture and claimed the lives of more than 220,000 people. In the book "Active Faults of the World," written by Robert Yeats and published by the Cambridge University Press, the author noted modern estimates think the death toll from this particular earthquake may be even higher.

The scientists noted that the Haiyuan fault is fairly similar to the San Andreas fault, which is in the western part of the U.S. and has been studied using 3D laser scanning in the past.

Need for 3D scanning and modeling
Aerial LiDAR was crucial to helping researchers accurately measure the fault zone's tectonic features because it provides a high-resolution image of the landform and can penetrate the "bare" earth to precisely identify topographic features, according to the researchers. The team used a Leica ALS-60 LiDAR system on a Chinese aircraft to gather data from the fault zone. Scanning took place over a period of a week. After the data was collected, the researchers used 3D modeling to generate accurate digital replicas of the landform's tectonic features, which will be used to help researchers identify future fault hazards.

Yet there is still more work to do, according to the scientists, as there remains hundreds of areas to scan and study and additional steps in the process are needed to understand the fault zone's many features.

"In the future, we can expect that more and more concepts or models of fault activity would benefit from this unprecedented survey technique," they wrote. "[…] More than 600 channels or other linear geomorphic features have been identified for further comprehensive analysis. The next step is to measure the displacements along the whole Haiyuan fault and analyze the principle of the slip distribution, which would help people better understand the fundamental link between fault activity and large earthquakes and assess potential risk for future earthquake hazards."

Laser scanning has helped researchers in China and in the U.S. gather the most accurate data ever collected from the Haiyuan fault zone, and 3D modeling has given these scientists the ability to look at the zone in high resolution to see fault traces better than in the past.