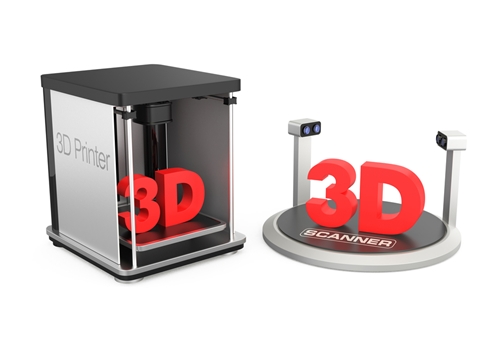 For example, Creaform recently released new Go!SCAN 3D scanners and VXmodel 3D scan-to-print software, which, when used together, excel at preparing files for 3D printing. The scanner and software pair well with each other, as the scanner is able to quickly and accurate gather data, and the software can easily ready those files for use by a 3D printer. According to Creaform, the Go!SCAN 3D and VXmodel module can seamlessly integrate existing tools so that additional post-treatment software isn't needed. This means all professionals need is the scanner, software and printer to create a perfect physical replica of a structure or site.

This type of technology promises to have numerous benefits for the 3D laser scanning industry, but what about one tool that does everything? A tool that scans an area, processes the information and can print off a scaled model of the scanned space or building? The technology may not be there yet – most of the all-in-one scanners and printers are self-contained and often can only map small objects and create replicas of them – but there may be more possibilities about what this technology can accomplish.

Emerging technology
The all-in-one 3D scanning and printing technology is relatively new and promises to have many applications. According to online technology news source Gizmag, AIO Robotics recently came out with Zeus, a printer that can scan an object that is less than nine inches in diameter and five inches tall and print a new version of the object. Zeus, which started as a project on Kickstarter, works a little differently than other types of 3D printers. It can function on its own without the help of a computer or additional technology. The majority of 3D printers can print objects using a CAD file, which is where laser scanners and software come in. However, Gizmag reported Zeus uses a Exynos-based quad-core 1.7 gigahertz system and stores scanned data internally or on a microSD card. The news source reported the scanned object can then be printed by Zeus or sent through the Internet to another device to be printed.

Another all-in-one 3D laser scanning and printing solution that was recently launched is called the da Vinci 1.0 AiO and the da Vinci 2.1 AiO from XYZprinting, which is owned by electronics manufacturing company New Kinpo Group, according to online 3D printing news source Personalize. The da Vinci 1.0 and 2.1 printers will now have built-in scanners in their new models, and will be able to scan small objects within a few minutes. XYZprinting's president noted that the company aims for its new technology to make it easier for those who don't know how to use 3D modeling software to still create replicas of objects, as the devices will do everything for users.

These all-in-one tools have many limitations. For instance, these devices are only able to scan small objects. Gizmag reported Zeus takes a long period of time to gather data on one object – around 30 minutes per scan – and is challenged when it comes to reflective surfaces. While these tools may indicate what could be possible when it comes to the applications of 3D laser scanning and modeling, using traditional laser scanners and tried-and-true modeling software will remain the way to go for years to come.

nextMarket your architectural firm with 3D models of existing projects